Little is known about Tony Bolin’s early musical beginnings except for a defining moment at age twelve when his Mother redeemed a number of completed booklets of S&H Green Stamps on a Japanese Stella plywood, acoustic guitar.  That first guitar had the playing action of a tight barbwire fence and a tone similar to a hollow log submersed under water for several years.  Thus, a musical seed was planted and to everyone’s surprise, subsequently bloomed.

Many cheap guitars and countless hours of practice followed.  The initial result was music that resembled the sound of nails on a chalkboard or the squealing of small animals caught in a snare.  Through perseverance aided by marginal talent, Tony eventually performed throughout the Southeast as both a solo act and with a number of musical groups such as The Snat Brothers, as an acoustic duo with Russell Long, and Up Your Dosage, an eclectic string band which plied the marginally lucrative college fraternity party / Steak & Ale circuit.

As with many young musicians, maturity and an honest assessment of talent indicated a different course was in order. A respectable, (ahem), job was acquired, and a family was raised.  Musical outings were conducted in obscurity with the occasional highlights consisting of playing with various acoustic-based groups such as Wild Blue Yonder, the Outside Agi-Taters, and Lester Road & the Tail Draggers.  These groups performed infrequently, but with some success, at such vaunted venues as The Red Light Café, Williamson Music Barn, The Hollonville Opry, HarvestFest, the Yellow Daisy Festival, the North Georgia Wine Festival, and Sparkles Skate-A-Rama.  A musical plateau was reached and anonymity embraced.

Strangely, and with no conscious intent, a musical serendipity made its appearance only a few short years ago.  The Song Writing Muses turned their attention towards Tony and original compositions began to flow.  Likely, this was a case of mistaken identity by the Muses, —-however, never one to whisper in a gift horse’s ear, Tony began to accumulate a collection of original, although at that point, unperformed songs.  As the collection grew, the time arrived to perform the songs before live audiences and see what happened; preferably, audiences that were kind and forgiving.

Countless open mics and live performances later, the positive responses to Tony’s songs have been both surprising and pleasing, —and never taken for granted.  Melodic and laid back, each song tells a story and the stories are ones worth hearing.   One might say the early scheme of “getting rich” very, very, very, slowly by writing songs and playing music is working even better than Tony thought it would.  (Actually, the slow part of the scheme is the only thing right on track).  New songs continue to spring forth like a gift, the writing seems to be improving day-by-day, and Tony continues to entertain audiences with songs that are sometimes amusing, sometimes moving, though hopefully, always thoughtful.  A CD has been released with much appreciated approval from friends and fellow musicians.  What better reward can there be?

Most of the above is true, although exaggerations abound, along with a few outright lies.  But that’s his story and he’s sticking to it. 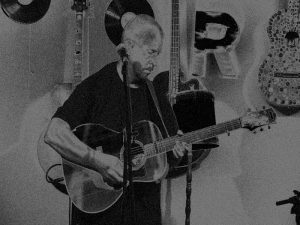